The shift to tumour-agnostic immunotherapies

Up until recently, cancer treatments focused on the pathology of a cancer – the tissue type and the site of the cancer (e.g. skin, breast, colon, sarcom...

Up until recently, cancer treatments focused on the pathology of a cancer – the tissue type and the site of the cancer (e.g. skin, breast, colon, sarcoma, etc.,) and how much cancer the patient has (local, regional, metastatic, how many lymph nodes, etc).

Clinicians focusing solely on the pathology would ask, “What type of cancer does the patient have?” and recommend a treatment based on that information. This focus ignores an important fact: the immune system is the most powerful tool we can leverage in the fight against cancer.

Most conventional therapies do not take the patient’s immune system into account; many of those therapies even weaken the patient’s immune system essentially lowering critical defenses the body has to fight the cancer allowing it to thrive. When functioning at its full potential, the immune system fights our battles for us, conducting immune surveillance to prevent cancer from gaining a foothold, preventing the spread of cancer and preventing the growth of residual disease – the cancer left over after traditional chemotherapy. When the immune system is compromised, none of this happens and the cancer develops without any resistance with a predictable result.

One of the paradoxes of cancer therapy of the last 50 years is that the chemotherapy given to eliminate the cancer weakens the immune system. Weakening the immune system helps the cancer thrive and limits the chance for survival. Have we been our own worst enemies in the fight against cancer?

As Bob Dylan said, “Times...they be a changing.” We are changing the way we approach cancer therapy: a shift to tumour-agnostic immunotherapies that boast the patient’s immune response to the tumour.

Put simply, we should stop worrying about the type of cancer the patient has and worry instead about fixing what is broken in their immune system.

This paradigm shift is evident in recent Food and Drug Administration (FDA) approvals, as well as therapies undergoing clinical trials. There are several examples of therapies and drug candidates that focus on fixing various areas of the immune system that are often defective when cancer is developing.

Among its various approvals, Keytruda (pembrolizumab) was approved by the FDA for the treatment of unresectable or metastatic solid tumours that have been identified as having microsatellite instability-high (MSI-H) or mismatch repair deficiency (dMMR). The approval of pembrolizumab was notable as it was the first and only time that the FDA approved a cancer treatment based on a common biomarker alone, rather than the location in the body where the tumour originated. Previously approved drugs that were tied to specific biomarkers were also for specific tumour types. 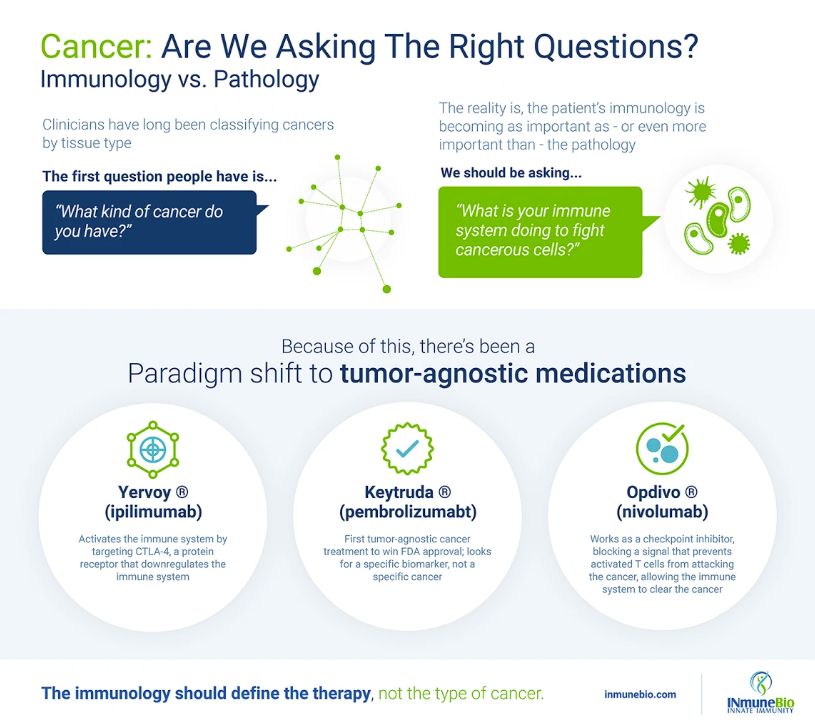 Opdivo (nivolumab) is a checkpoint inhibitor that reduces tumour growth by blocking the interaction between biomarkers PD-1, PD-L1 and PD-L2 that would have prevented activated T-cells from attacking a cancer. The drug to date has been approved by the FDA for the treatment of several cancers including melanoma, squamous cell lung cancer, renal cell carcinoma and classical Hodgkin lymphoma.

YERVOY (ipilimumab) stimulates T-cells and activates the immune system by targeting CTLA-4, a protein receptor on the surface of T-cells that downregulates immune responses by functioning as an immune checkpoint inhibitor. The drug received FDA approval for the treatment of melanoma and is undergoing clinical trials for non-small cell lung carcinoma, small cell lung cancer, bladder cancer and prostate cancer.

Although pembrolizumab is currently the only drug with FDA approval as a tumor-agnostic therapy, ipilimumab and nivolumab illustrate the path which cancer treatment is headed: immunotherapies targeting immunological biomarkers.

Immunological biomarkers allow us to determine the quality of the immune system and monitor the success of our therapies, profiling the patient’s immune system to see what is “broken.” Checkpoint inhibitors in particular have received their many approvals using a traditional tumour-by-tumour clinical trial approach (one trial in melanoma, another in lung cancer, etc.).

The shift to tumour-agnostic medication, with a focus on the immunology and not the pathology is one that will take time; however, we can expect to see more approvals of drugs targeting immunological biomarkers.

Using new immune targeted therapies, we are seeing improvements in remission rates; but we have a long way to go. To continually increase remission rates, we must understand and embrace the vital role that the immune system plays in the battle against the cancer.

The immunology should be centerstage in our approach to new cancer therapies. While we are just at the beginning stages of this revolution, it is the future of cancer therapy, giving us the best chance of seeing increased survival rates.

Raymond J. Tesi, M.D., CEO and CMO at INmune Bio, an immunotherapy company developing treatments to reprogram the patient’s innate immune system. Dr Tesi received his M.D. degree from Washington University School of Medicine in 1982 and has been a licensed physician since 1982. Dr Tesi is also a Fellow of the American College of Surgery