Scared of Ebola? This Measles Outbreak is Far More Dangerous.

Just a few short months ago, the United States was terrified of Ebola. Even though an outbreak never materialized, the panic that was running through Am...

Just a few short months ago, the United States was terrified of Ebola. Even though an outbreak never materialized, the panic that was running through Americans was leading to haste accusations – 80 percent of Americans even wanted doctors and nurses that treated Ebola patients to be locked into quarantines, despite lack of medical evidence, according to The Washington Post.

But as the United States continued to treat the few Ebola victims and return them to proper health, that fear dwindled down, and eventually, disappeared.

Back in December, a measles outbreak was linked to visitors to the Disneyland Resort Theme Parks in Orange County, California. Sixty-seven people from California and six other states were sickened, according to the latest count from the Centers for Disease Control and Prevention.

The measles outbreak, which unlike Ebola that never had a proper foothold in the country, is here to stay; and it’s only going to get worse.

So far this year there have been 84 measles cases in 14 states – that’s more than U.S. typically sees in an entire year, Dr. Anne Schuchat of the CDC said on Thursday.

“This is a wake-up call to make sure measles doesn’t get a foothold back in our country,” she said.

“We have had, in two and a half weeks, as many cases [in California] as we had in all of last year,” Dr. Gil Chavez, state epidemiologist for California, said. “From this particular outbreak, we can expect to see additional cases.”

Measles is caused by the measles virus. It begins with a fever that lasts for a couple of days, followed by a cough, runny nose, and conjunctivitis (pink eye). The illness starts with a runny nose, watery eyes, cough, and high fever. After 2 or 3 days, tiny white spots appear in the mouth. After 2 more days, a raised, red rash starts on the face and spreads down the body and out to the arms and legs. The rash usually lasts 4 to 7 days. Symptoms start about 10 days after exposure and last from 1 to 2 weeks. After about five days, the rash fades in the same order it appeared.

Measles is highly contagious. Ninety percent of people who aren't immune get sick after being around an infected person. Vaccination against the virus is highly effective. Schuchat said the current outbreak is happening because people haven't been vaccinated — not because the measles vaccine isn't working.

The latest wave of cases and potential infections to be identified is in Arizona. Health officials there said 1,000 people may have been exposed to measles from seven people confirmed to have been sick with measles there. Four of those cases were in an unvaccinated family that visited Disneyland.

"This is a critical point in this outbreak," wrote Will Humble, director of the Arizona Department of Health Services, in a blog post Wednesday. "If the public health system and medical community are able to identify every single susceptible case and get them into isolation, we have a chance of stopping this outbreak here. However, if we miss any potential cases and some of them go to a congregate setting with numerous susceptible contacts, we could be in for a long and protracted outbreak." 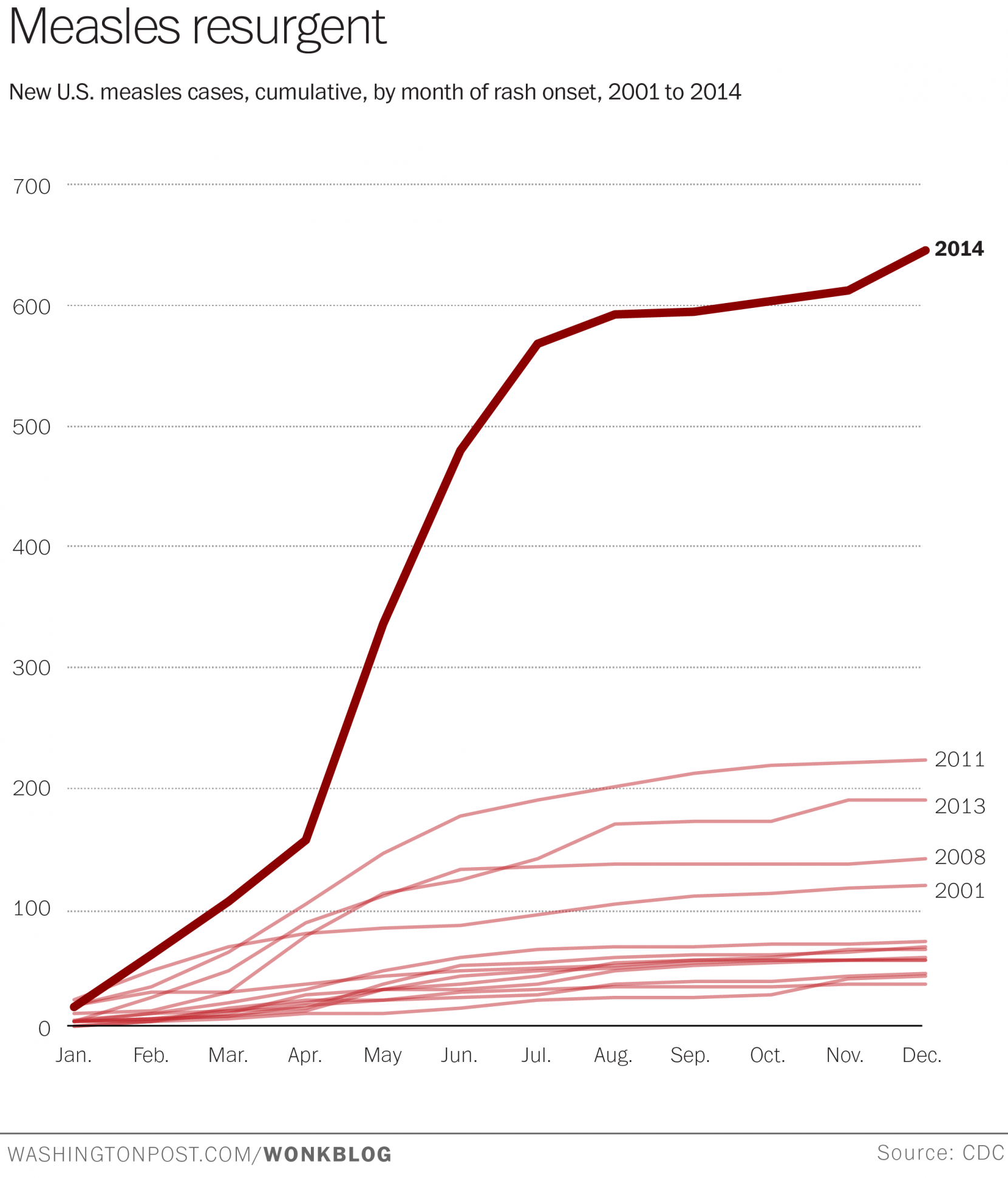 As Chris Ingraham’s Wonkblog graphic above illustrates, the number of measles cases in the United States has been skyrocketing for months. Why?

According to Forbes, there are three major reasons:

1. More parents are deciding not to vaccinate their kids, and then choosing to live in clusters near like-minded people.

2. There’s a growing opt-out rate for those vaccinations, which is as high as 13 percent in parts of California.

3. Some doctors are even parroting their patients’ false fears about vaccines.

Widespread vaccination led to a decline in measles, and the disease was declared eliminated in the U.S. in 2000. Vaccination has kept the illness at bay, but the disease remains common in many countries, and travelers bring cases back to the U.S.

Measles is also an aggressive and unrelenting disease, and someone infected with measles can infect 12 to 18 additional people (someone with Ebola, on the other hand, may only infect one or two more people). Even someone who’s been vaccinated against measles runs a low risk of getting infected. Notably, about a half-dozen of the people infected in the Disneyland outbreak had been vaccinated against measles.

The "overall picture has been getting better, not worse" for vaccination, Schuchat said. But pockets where many people haven't been vaccinated, such as the Amish communities in Ohio back in 2014, provide fertile ground for the measles virus.

America fussed over Ebola and clamored for a non-existent Ebola vaccine, and yet many last year admitted to not vaccinating their children for measles, mumps and the flu.

The world ignored Ebola until it came to America, and then we panicked. The measles outbreak is self-created but we aren’t panicking enough.

While the Ebola virus has a higher death rate (50 percent as opposed to the measles’ 10 percent), a preventable disease such as the measles continues to worsen in America. And there’s only one thing keeping it alive: willful ignorance.